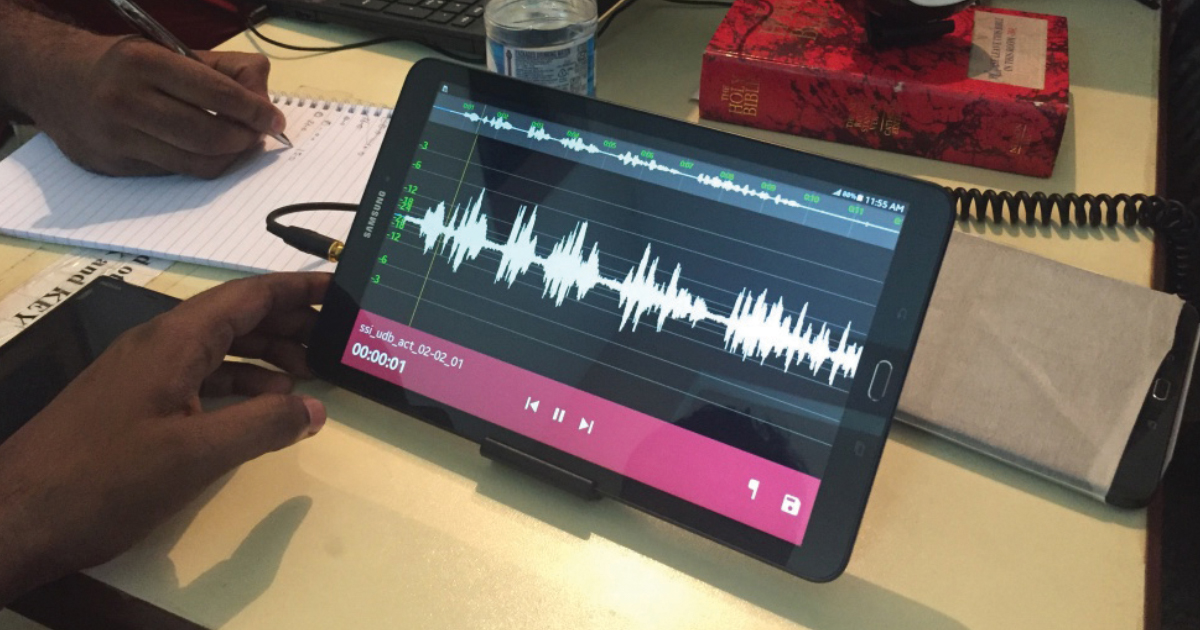 I want to introduce you to a man I’ll call Huy. He was born and raised in Southeast Asia. He’s a caring, hardworking young man, but he’s lost. He has never looked at a Bible and discovered the plan of salvation.

That’s because Huy can’t read or write. None of his people can because their language is spoken only . . . they don't even have an alphabet!

There are thousands of oral cultures like Huy’s, cultures that have been maintained by one generation orally passing on a way of life to the next generation. It is through beautiful songs and stories, fairy tales and folklore, that these people groups share these details—repeated with great care and concern—to preserve their history, culture, and traditions!

I was recently meditating on Proverbs 7:1-3:

“My son, keep my words and store up my commands within you. Keep my commands and you will live; guard my teachings as the apple of your eye. Bind them on your fingers; write them on the tablet of your heart.”

This reminds me of the way oral cultures work and how they pass down traditions, century after century. The stories of their heroes, the tales of victory and struggle, even the conquests of their ancestors are all told so many times that they become ingrained in the minds and in the hearts of every boy and girl . . . so they, too, can share them with their children.

But my heart was grieved to think that no one has told them about the greatest story of all . . . and because they have never heard about God’s love, there is no way for them to pass it down!

In a Place with No Written Language

We have identified 50 spoken-only language groups—millions of people—who deeply need God’s Word. A traditionally printed Bible won’t do . . . they need Scripture in a format they can understand.

In Huy’s homeland, a communist country with many spoken-only language groups, every day brings intense persecution for believers. They are constantly harassed by authorities for being Christians . . . and other language groups shame them as an “inferior” culture because of their “illiteracy.” These brothers and sisters greatly need the strength and comfort that can only be found in God’s Word!

In fact, some oral people groups throughout the world commit large portions of Scripture to memory so they have God’s Word available to them—they are tremendously skilled in memorization.

But they need access to all of God’s Word, not just the parts they memorize.

I think back to the verses in Proverbs that remind us to keep God’s Word close—the way an oral culture would do—so familiar it is essentially written on our hearts. You and I have the privilege of gleaning from God’s Word every day! It is easily accessible, and when we are down, we can turn to Scripture to remind us of the joy we have in Christ. When we grieve, we know that God’s Word will bring us comfort.

Audio is the Answer

In a spoken-only culture, a written and printed Bible isn’t what the people need most—it can’t be read; it can’t be hidden in the hearts of our brothers and sisters. But just like traditional stories are handed down from generation to generation, Bible translation technology can help create an audio recording of national translators speaking God’s Word in their heart language . . . Scripture can now be handed down, too!

I was amazed to watch a group of national translators record and hear their own voices for the first time. It was fun to see them surprised by the sound of their voice—surprised by the technology—but quickly, they move past the newness of audio recordings and focused their energy on translation.

Three elders of this language group began quarreling. They are a very proper culture, so it was rare to see anyone raise their voice over another. Yet, these three men seemed to be arguing with real intensity. The workshop leader asked his interpreter what the problem was. Her answer astonished him. . . .

They were debating the translation of a single word of Scripture. They wanted to make sure it would communicate accurately to their people. There was a real sense of urgency surrounding their work, and they were taking very seriously the task before them. “We only have one chance at getting God’s Word to our people,” they said. “We have to get everything right.”

National translators in these spoken-only cultures are determined to have God’s Word for their people—they want their people to know who God is . . . in His fullness. And they know that will only happen when they have the fullness of God’s Word!

Bible translation technology is key for these spoken-only cultures. Wycliffe Associates developed Bible Translation Recording Kits (BTRKs) so national translators have the tools and resources to create an audio version of the Bible in their heart language.

When a printed Bible would simply sit on a shelf—impossible for an oral culture to engage with—audio Scripture can speak God’s Word into their hearts!

And what they hear, they will remember. It will become part of them. Because in their culture, everything of value is heard.

We can provide the valuable resource of BTRKs for these language groups ready to start translation projects. I would ask that you prayerfully consider how you can help get God’s Word into these oral communities by helping to provide BTRK technology.

My heart gets excited when I think about how this moment will be passed down in their oral history—the time when they heard that there was a Savior who died for their sins. I rejoice thinking about how their stories will include the time they hear about the love and hope they have in Jesus Christ! The impact of one BTRK will be phenomenal—their lives and their communities will never be the same.