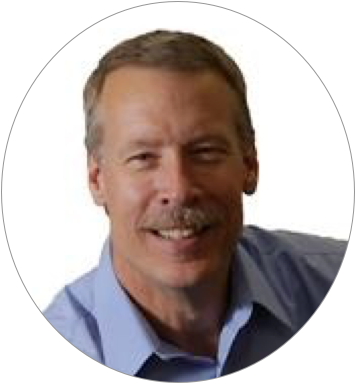 NOTE: This is an update to my last post, entitled From Death to Life, in which I introduced this new translation project.

As I arrived at the retreat center in Asia, I was surprised to see our Wycliffe Associates team standing together talking in the driveway. I didn’t expect them to gather to greet me, and sure enough—they hadn’t! They had two good reasons for gathering there. First, they were standing in the sunshine trying to get warm. Overnight temperatures at that elevation were around 43°F. Second, by the time I arrived during the second week of this translation strategy, the Ng* were off and running and didn’t need us slowing them down!

“You missed it.” That’s the way my team greeted me.

Forming
We had prayed and planned for 26 Ng translators to work together. For a variety of reasons, seven of those invited were unable to come. Then, at the last minute, six more backed out. That meant the Ng translation team was down to 13—half the number we had hoped for.

As I’ve heard the story of the first week of the project, things got off to a rocky start. A few of the assembled attendees knew each other from attending the same Ng church, but most had never met. None of the Ng translators who translated 1 and 2 Thessalonians this summer were able to return, so none of the attendees knew anything about the translation strategy our team introduced. So on day one, our team described the process, and the reception by the Ng attendees ranged from cool to cold.

Everyone was open to trying our strategy. They came to the project with humility, convinced of their own inabilities. One Ng person in particular was very concerned about accuracy, and another was worried that his poor memory would make him incapable. Yet when the assembled people heard the plan, they were convinced they were were very willing to give it a try.

Despite the Ng skepticism, our team encouraged them to step out in faith and give the translation strategy their best efforts. They had nothing to lose! They were open to the strategy and eager to begin. So after a brief assessment of the Ng team members’ language skills, we divided them into four teams—Matthew, Mark, Luke, and John.

The whole translation strategy is based on learning principles that have been tested and proven over a long period of time in a wide range of educational settings. The initial drafting process is deceptively simple. Each team member is assigned a different portion of the book. The translator reads a brief passage from the source language, long enough to include a whole thought but short enough to remember in short-term memory. Then they close their Bible and think about the passage in their own language. After a few moments, they write the passage in Ng. After drafting the translation, they reopen their Bible and check to see whether they have unintentionally added, subtracted, or distorted the passage. If so, they revise. If not, they continue drafting. The goal is for each translator to draft and check 34 verses per day. Typically, they were drafting during the mornings and then spending the afternoons and evenings in a five-step checking process.

When I arrived on day 8 the Ng translators had already drafted 75% and checked 47% of all four Gospels! 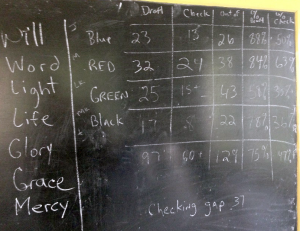 They had actually drafted more, but during the checking process the Luke team discovered some problems and decided, appropriately, to correct them sooner instead of later.

There is a lot more I could write about this story, but time and space do not allow today. I’ll look for ways to do this in the coming days.

The bottom line is that with just half of the expected translators, by the end of the two-week strategy they drafted and checked Matthew, Mark, Luke, John, and 1 & 2 Timothy! My team tells me this is 48% of the New Testament!

I need to quickly add that there is still a lot of work to do on these drafts. Although they have passed five phases of checking, including checking against the original Greek text, there are several challenges they have to work through to complete the drafts.

Since Ng has never been written until two weeks ago, they have not standardized their spellings. The word processing program they used to type the drafts doesn’t spell-check Ng. Once they reconcile the various spellings, they will work through a search and replace function to standardize the spellings. In addition, Ng is a tonal language—but the alphabet they used doesn’t include tonal indicators. So they need to settle on how they want to indicate tones. Ng also has three dialects, so they need to make a decision about how to address this in their translation.

Winter is coming hard and fast to the Himalayas, so it will be very difficult for them to communicate and collaborate in the coming months. However, at this point they are so exhilarated by the results, they have created a plan to resolve the challenges I just described during the winter and then reconvene in April to finish drafting and checking the rest of the New Testament! They could have the first Ng New Testament printed, and recorded in audio by next summer! 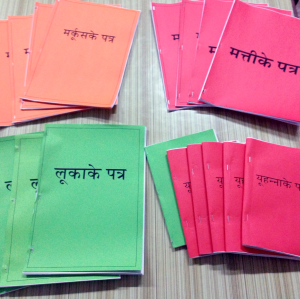 This is not the end of the story for either the Ng or for the parallel translation strategy. We have a rapidly expanding number of partners and languages who want to test this strategy as soon as is practical. Our 2015 calendar is quickly filling up! The great news about this is that it will not only increase the number of languages that have Bible translation in progress, it will also significantly expand the team of trained facilitators—meaning that even more languages can benefit in the years to come!

Who knows what God has in mind? At this point we are, together with the Ng believers, praising God and singing “Glory to God in the Highest”. . . for this is the very first Christmas they have the Christmas story in Matthew, Mark, Luke, and John!

Thank you for caring about the Ng, and for sharing in making all this possible!

*For security reasons, we are using a pseudonym for the people group and their language.